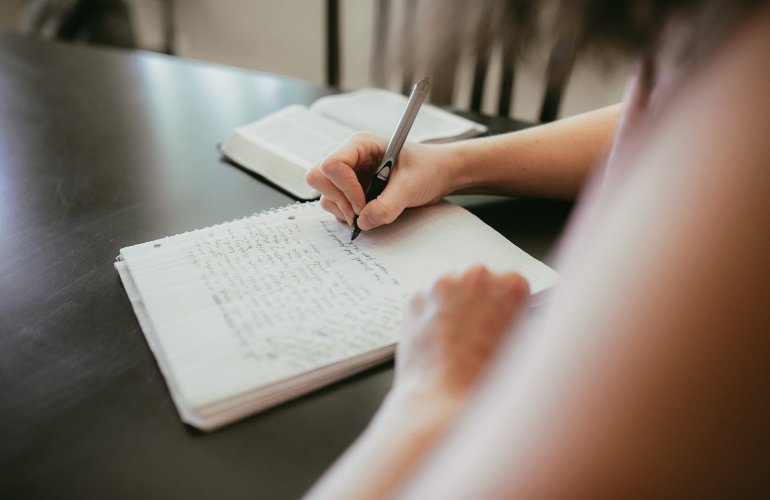 In my 8th grade honors English class, we spent one day a week in creative writing. We had folders full of drafts, we workshopped together, we even had to “publish” our favorites with construction paper covers. At the end of 8th grade, my family and I moved across the state, and I began to journal. I journaled the heartache and pain of a move to a 13 year old girl. And throughout high school I scribbled poetry in the margins of my school work, and the programs at church. In college, I studied creative writing, and even got published in my first literary magazine. And yet, when God called me to write, I said “No, not me. I’m not qualified,” as if God had not been walking me through life with pen in hand, as if he had not paved the way for me to be a writer. Even still, there was fear, there was hesitation, there was a sense that I was unworthy of his call.

When David was called by God to serve him, we will see that his whole life had been preparing him for the moments he spent following his call. His job as a shepherd prepared him to be a mighty warrior. His talents with playing the lyre gave him an in with the present king. His friendship with Jonathan enabled him to stay alive. So much of what God has given us in our passions, our talents, our paths we’ve walked, has been preparation for what he wants from us. And a lot of this preparation is not glamorous. I wrote poems about boys that didn’t even know I existed, and I journaled about trivial things like being afraid to hold the yellow pythons in my middle school science class. But all of these small (maybe embarrassing)  moments led to my writing today. It is not our outward appearance or our successes that propel us into God’s work: it’s our hearts.

The Lord told Samuel that there would be a new king. The Lord told Samuel to go to the house of Jesse and anoint one of his sons. Samuel thought “oh for sure it will be Eliab, or maybe the second oldest. Maybe it will be the strongest, the most handsome, the smartest,” and God said no. God said wait and see. God said there is one more kid who isn’t here. There is one teenager working in the field with the sheep who you all have overlooked. He will be king. Anoint him and see.

His father didn’t even see him as a possibility of being anointed as king. Even Samuel, chosen and sent by God to find the anointed one, thought it would be Eliab; it wasn’t him or any of the other sons. They had to call him out of the fields where he was working as a shepherd and bring him to Samuel. He wasn’t even given the chance to be anointed. The world wasn’t going to give him the chance, but God was. God chose a shepherd to be a “man after his own heart.” We don’t need to be qualified by the world’s standards. We don’t even need to be qualified by the person who is sent to qualify us. We are only meant to be anointed by God, chosen by God to do his great work.

But David also could have said, “no, I’m gonna pass on seeing Samuel the anointer kings. I’m gonna skip that because there’s no way it’s me.” But he made the walk. Samuel waited, and David came. David left his work, he got his sheep all situated and made the journey back to his home. He faced the possible rejection head on because it was God’s call. What do you need to do to follow God’s call on your life? What seemingly unattainable thing is God calling you to do today? What sheep is he calling you to leave behind? What responsibilities are holding you back? Is there a group of people like David’s family that is holding you back? Who are they and can you just walk away? And it’s not really can you do it, it’s can you trust that God can do it?

When we say no to God’s call, we’re saying “God there’s no way that you can make me of worth enough to do this thing.” You are saying that God is not big enough to make you a good writer, a good friend, a leader, a teacher, a boss, whatever it is. God can do all things, he can, and he will. He is only in the business of taking small dreams and under-qualified people, and using them for his glory because then only he can boast. I can’t say I’m a great writer because of this, this, and this. I can say I write because God asked me to, because God wants to use me to say something to his people. He wants to use me in my home, with all my kids, with ministry, with friends, with family, and he wants me to say yes. He wants you, in your life, to say yes.

“So Samuel took the horn of oil and anointed him in the presence of his brothers, and from that day on the Spirit of the Lord came powerfully upon David…”   1 Samuel 16:13

When I set out to write, I didn’t know what this journey would look like. I still don’t know if I’ll blog forever, if I’ll write a book, if I’ll stop all this in two years and be glad for the experience. I don’t know, and David didn’t know, but I know God called me to write this right now. I know he prepared me and he called me. I do not have a masters in creative writing, or a few published books under my belt, but I have the Lord’s strength, the Lord’s words, the Lord’s power, and that is what I need. That is all David needed, and that is all you need today.

2 thoughts on “The Under-qualified King”